Chats on Costume, by G. Woolliscroft Rhead, is an interesting book about costumes over the centuries. It does not go into great detail, but does have a lot of illustrations.  It was published in 1906, so don’t expect anything about 20th century dress. And it goes as far back as the Egyptian and Assyrian period.

Lest you think it’s divided up by period, it is not. It’s more along the lines of the various sorts of clothing, i.e., the tunic, the petticoat. collars and cuffs, or boots, shoes and other coverings for the feet. There’s even a chapter totally on crinoline.

It also reveals some fascinating ideas of the day, like these thoughts about why men go bald more frequently than women:

Dr. Jaeger (“Health Culture”) discusses the probable reasons for the greater prevalence of baldness among men than among women. While rejecting the theory that the competition of the beard is precarious to the hair of the head, abstracting from the latter its due nourishment, and pointing out that the long beards and luxuriant heads of hair of our ancestors refute this theory that the more strenuous head-work which falls to the share of the male sex is responsible for the loss of hair; that the unnatural custom of cutting men’s hair, first adopted when nature was abandoned in favour of the fashions of civilisation, is to blame for it; that drink, dissolute habits, or heredity is the cause—he finds that a far more probable cause is the difference between the male and female head-covering, “which latter is, as a rule, lighter, more airy, and more porous than the usually almost waterproof and exceedingly absurd male head-coverings, such as the stiff felt hats, and high hats, with the strip of leather which encircles the forehead and effectually retains the perspiration.”

Who knew male baldness could be caused by these various things?? A beard draws nourishment away from the hair of the head? Men using their brain more than women makes their hair fall out?!? Cutting your hair makes you go bald?? And finally they conclude, it’s the hats men wore which retained perspiration and thus apparently caused the hair on the head to die. My, my, talk about a totally different culture!

Speaking of head attire, we mustn’t skip the ladies. Here’s one illustration of female head-dress representing a ship in full sail! 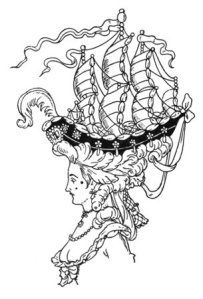 It goes on to explain for the year 1776, fashionable head-dresses were sometimes 2 yards tall! The publications of the day were printing warnings:

A print issued by The New Fashioned Phaeton is a ‘hint to the ladies to take care of their heads.’ The ladies’ head-dress having caught alight from a chandelier hanging from the ceiling of a high room, and people are putting out the fire by means of large squirts.

I think I’d rather go bald, than have my head-dress catch on fire!!

If you’re interested in history or old costumes, it’s a great read. If you’re wondering what era your ancestors’ photos were taken, try one of the other 46,875 free ebooks Gutenberg has!

Genealogy on and off the Web